Contrary to what pop culture may claim, Aquaman does not suck. This preface shouldn't be necessary, thanks to the Justice League cartoon ("King of the seas, remember?" said the man who cut off his own hand and replaced it with a harpoon to save his son), Brightest Day, and most recently, Geoff Johns' run on Aquaman and Justice League. I've mentioned before how I am a fan of Aquaman, and how in the hands of a talented writer, he can be one of the most impressive heroes in DC comics.

As such, it is my pleasure to review issues 15 of Justice League and Aquaman, the first two parts of the "Throne of Atlantis" arc. Written by Geoff Johns, who revitalized Aquaman with his inclusion in Blackest Night and Brightest Day, as well as his excellent run in DC's New 52 (see my earlier reviews for my thoughts on that), we now get to see an all-out Atlantean war against the surface, and Aquaman struggling to maintain peace between his two worlds. 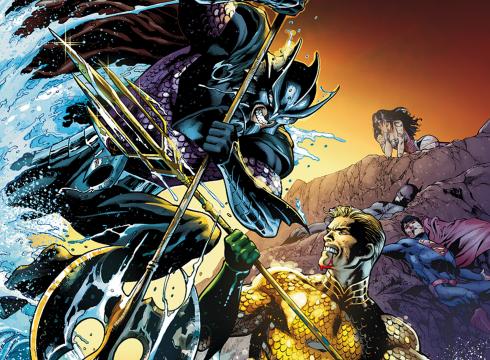 It begins in Justice League #15, so I'll discuss more than just Aquaman in this part. While it begins with an attack on Atlantis, the way that it happens makes it clear that someone is playing them against each other. As such, Atlantis is acting in self-defense (from an Atlantean perspective), no matter how excessive the counter-attack might be. With that in mind, one might wonder: is this a metaphor for the Israel-Palestine conflict? I'm going to say no, it's a comic, stop trying to politicize everything and let me enjoy my comics in peace, theoretical reader asking me this sort of charged question.

Still, every good action needs setup, and we see a very humanizing moment for Wonder Woman, as she goes out with Superman. Now, I was never on the Supes/Wondey ship. I'm still not, but if you like it, I can't particularly blame you after seeing this scene, as Clark helps bring Diana closer to earth. It's a sweet moment for the two characters, showing a side of Wonder Woman we haven't seen in a while, and a side of Superman we don't see enough of in his current runs.

Of course, there's no shortage on action, either, starting with Batman and Aquaman taking down some thugs, with Mera once again proving that she's more than a badass in her own right.

Speaking of Mera, she gets a crowning moment of awesome in Aquaman #15. Her hydromancy is taken to its limits, but she alone saves more lives than the rest of the Justice League combined after the initial assault. That said, the lives lost number far greater than those saved regardless; in a war against Atlantis, there will be casualties on both sides.

Also in Aquaman is a little more on the New 52 Aquaman's backstory. The latest arc took us through a chapter of his life from before Atlantis, before Arthur was the Aquaman we know today, and now we learn a little more about what he did when he returned to the ocean and took his place as king. Suffice to say, he's not proud of the things he did, which are now being used against him.

However, the characters aren't going through the regular motions of "let's fight everyone until we figure something out." This is a classic brother versus brother conflict, with Aquaman wanting to stop conflicts by talking to his brother, Orm. Aquaman wants peace between the two worlds he lived in, but with such a high body count, there's no stopping the conflict. He wants to do what's right, but in a battle orchestrated by unknown forces, with each side itching to get revenge, what exactly is the right thing to do?

If you want to jump in on Aquaman or Justice League, this is a great place to do it. If you're reading one already, perhaps this will get you interested in the other. The story is great, the artwork wonderful, and they tie together seamlessly. If you're a fan of Aquaman, you'll like the start this storyline is off to. If you're not a fan of Aquaman, maybe this will change your mind.
Posted by Eliteslayer at 12:25 PM No comments: